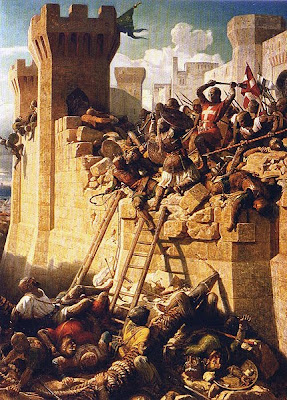 On September 25th the Reno Chess Club began a crusade to return the Nevada State Championship trophy to its proper home in Reno. Battling the evil Las Vegas team, whom had guarded it viciously for 6 years.

In 1187 the German emperor frederick Barbarossa with Phillip 2nd of France set forth to finance and lead a "crusade" to retake the Holy Lands from Saladin and his various allies.

A year later the newly appointed king of England: Richard 1st "The Lion-Hearted" declared his allegiance to the endeavor-while much has been made of overriding religious sentiment in casual discussion of the Crusades- the true goal was Near-East riches, expanded trading routes, prestige and adventure.

Barbarossa drowned during the voyage to the Holy Lands and Phillip would fail to stay away from France long enough to support the cursading campaign to a victorious conclusion. These factors did however lead to Richard 1st engaging in heroic efforts, enabling the Latin kingdom to survive another century, but even he could not retake Jerusalem alone. He and Saladin eventually settled on an uneasy truce.

But before peace, there were gnarly and brutal military encounters...

3 exd5 exd5-Instead of investing in a strategic charge Lusignan harasses Acre from a distance. Launching rotten animal carcasses and fire bales into the stronghold by way of trebuchet.

4c4 Bb4+ A siege engineer launches a fire bale with great precision and scores a direct hit on the Muslim's main granary!

5 Nc3 Bf5 6 Nf3 A patrol of Muslim cavalry has completed their tasks and returning to the city are shocked by a besieged battle scene. They bring news of an incoming naval blockade of ships from Pisan and Genoa.

Qe7?! Lusignan abandons his trebuchets in fear that the charging horsemen are scouts from Saladin's army.

8 Be2 dxc4 9 0-0 0-0 10 Nd5! Having smashed Lusignan's long-range artillery brave Islamic warriors charge, spears pointed into the heart of the crusading infantry. They converge in a tight double-file formation and then spread out as they close in on the enemy troops. This causes a great panic, Lusignan's troops are now disoriented and communication is very difficult.

10...Qd6 11 Nxf6?! Thinking that this small Christian force comprises Europe's entire attack, the cavalry plunge into the heart of the crusader cavalry, leading to the loss of many horsemen for both sides.

15 Nxg6 hxg6 16 Qd3? Acre sends out lightly-armoured skirmishers to finish off the invading troops with their quick moving formations and projectile weaponry.

17 Bxf7+?? For fear of death the commander of Acre "blinks" and in a moment of panic he sends his troops on an all-out attack, Richard is in his cross-hairs! A great battle ensues.

22 Rac1 Qe8 23 Rc4 Be7 Richard regroups, calling out to his troops "Maintain formations, they wish to confuse you! draw on the strength of the True Cross! This shall be our finest hour!"

24 Qxb4 Rb8 25 Qf3 Rxb2! The gates of Acre have been breached by an English battering ram!

26 Qh3 The knights of Allah continue to pressure close to Richard. If they can kill the leader, victory will be theirs

29 Qh3?? Acre's main division fails to exploit the tactical errors of the crusaders and fall back.

29...Rb4 30 Rxb4 Nxb4 Both sides are exhausted an begin to fight under the emerging moonlight, a chaste breeze saves many from heat-stroke.

31. Qg4 Bf8?! Phillip's last group of longbow men back up the royal position, no longer attacking the city.

32 h4!? The peasants and children are given knives and farming tools and forced to attack the vulnerable crusader kings.

35 Rf3 Rxe3?? Lusignan's forces have breached the inner-courtyard but European leadership is under heavy duress.

36 gxf6 Re1+ 37 Kf3 Qe2+ 38 Kg3 Qe5+ 39 Kf2 Qe2+ 40 Kg3 All sides have paid heavily in this battle. Richard allows Muslims to retreat and abandon Acre as the Muslim forces stop just short of breaking through to him. He has taken the city, but at what cost? His victory may turn to defeat as Saladin's army is close and fully mobilized.

The blood that screams out from the now wet desert soil leaves Richard with his inner thoughts and justifications for this battle rattling around his skull. As he lay in bed, still in shock from the intensity of battle, he whispers to the shadows, or perhaps to God himself, "I wish not Saladin to be my Richard..."

Posted by ChargingKing at 4:04 PM