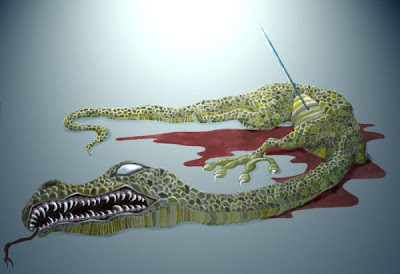 The knight smelt the burning aroma from a good deal away from the scene of battle.The dragon had been spotted several days prior by several townsfolk.The knight was sent with the specific mission of bringing back the corpse of the great beast.

He wasn't by any means a veteran but then again this wasn't the first dragon to meet his blade.He knew absolutely nothing else about this beast.Sizes and color varied in the different accounts but the general feeling was a mid-sized monster with decent skill at destroying the men that had come to challenge it.

The smell of the smoke eminating from the beast's nostrils allowed the knight to prepare himself mentally for battle.As he stepped out into the clearing he saw the beast lumbering out of the entrance of a large cavern.The knight drew his sword and charged the dragon.The dragon was immediately in the air and they circled each other as the beast swooped and eventually touched down in the clearing.The kinght saw the glistening purple scales and the large talons and became focused on the struggle that was taking place.It was him or the beast.This wasn't going to end in anything but death.

The knight began swinging his sabre very skillfully at the dragon.The dragon began backing up and trying desperately to dodge the sharp, cold metal.He was knocked back and began tumbling back and the knight took up a very aggressive stance.

The dragon then unexpectantly charged the knight.The knight was suprised, from this distance it wasn't so difficult to avoid any attack from the dragon and continue his assault.In fact the knight allowed a blow to glance off his armoured shoulder to allow himself to get closer to the dragon's underbelly.

The knight took the chance he was given and delivered punishing blows to the dragon.The beast was taking great punishment and soon vanquished in a manner unspeakable for this vernacular.

Posted by ChargingKing at 1:22 AM 2 comments: